I got to prepare a new laptop and upgrade it to Windows 11 recently. I was admittedly a bit skeptical that this would be much more than the typical "feature updates" we've come to know from Windows 10. As it turns out, I was pleasantly surprised.

The laptop I was setting up was a Samsung Galaxy branded two-in-one device running Windows 10 Home as the OEM version of the operating system. It has an Intel 11th Generation Core i5 processor, SSD drive, and 16GB of random access memory.

There are a lot of scenarios that won't be covered by this review. This is a home laptop with a use case of web, Microsoft Office products, printing, and video conferencing.

The biggest change is to the Windows taskbar and the Start Menu. The icons are by default centered on the screen. I thought I would find that jarring at first, but I surprising did not. I played with it for a few minutes and it really felt natural. I was curious and went into settings to return the menu to the left and it did not feel right. Part of that is that the Start Menu itself comes up as a window in the middle of the screen. 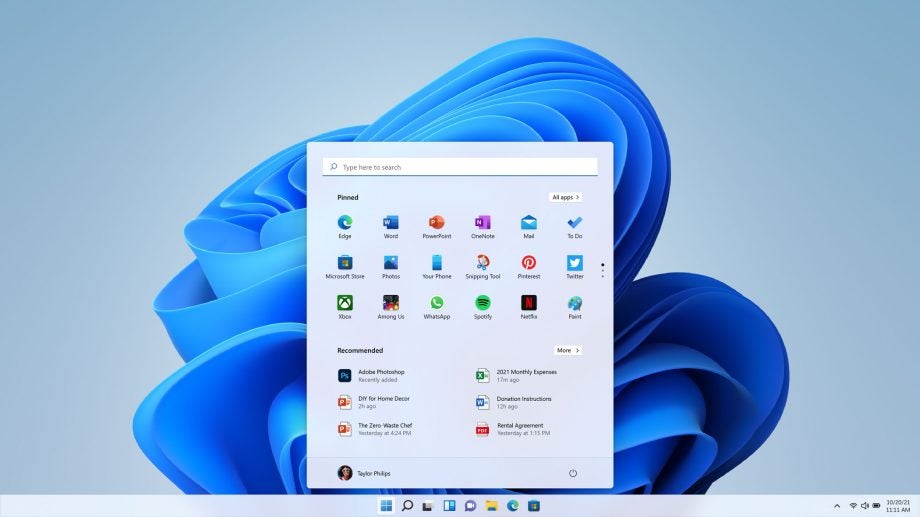 The start menu itself is much more helpful. It is no longer a just a skinny menu bar stuffed in a corner. In Windows 11 it better resembles more modern user interfaces made popular by mobile devices. As a big user of personal computers even I have gotten more use to mobile user interface design. This upgrade is more incremental than what Microsoft forced back in the days of Windows 8. This seems a lot better thought and hopefully better user tested. With the menu in the middle, the taskbar icons make more sense being center aligned as well. I have always found that it is best to accept design changes even if able to be reverted as they tend to coordinate with other design changes. Putting the taskbar on the left just makes the distance from the Start button to the Start menu arguably too far.

The core of functionality of the operating system seems relatively unchanged from Windows 10. I was able to add an existing wireless printer with ease. The integration of Microsoft 365 applications such as Word, Excel, PowerPoint, and OneDrive operate with ease. On new hardware the operating system was very responsive. Adobe Acrobat Reader and Zoom functioned quite well.

Now not absolutely everything was great. Windows still has a big problem that goes all the way back to Windows 8 that still hasn’t been solved. Some settings can be adjusted in the Settings application, some still require using the older Control Panel applets. At some point these need to be integrated. While not a big issue, it is still an annoyance as an information technology professional. I am called upon to adjust settings for my clients often and not having a one-stop shop for settings in a user interface is extremely annoying. My hope is that Microsoft is only a few years away from getting all of the control settings into the Settings application.

Microsoft has revamped changing default applications as has been reported by many publications. Now it’s not as bad as what I had originally heard. You are able to select an application and it shows you what file types it can be the default of. That is actually an improvement. Default settings are a bit more intuitive. However, each file type must be clicked on in order to change the defaults with is a bit annoying, especially considering this was changeable in Windows 10. I can’t speak to Microsoft’s motive for this, but it is suspect considering that applications like the Edge web browser and all other default applications start out as Microsoft products. Now, I was able to make the changes in a couple of minutes, so its not a huge deal, again it is just annoying.

As always, I'd love to hear you're thoughts and questions, so feel free to shoot a tweet to @jovian34 and I will gladly respond and perhaps write a blog post on a topic you suggest.